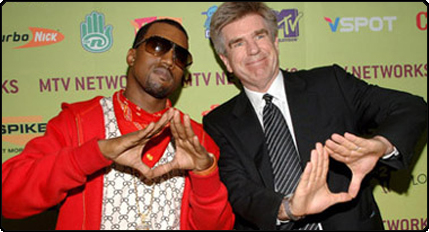 UPDATE 2: The links have been updated, so cop the songs.

UPDATE: So apparently people either loved or hated “Young Folks”. Maybe you guys would like his collabo with ATG-favorite Lupe Fiasco and Pharrell on the very same mixtape, under the alias CRS, or Child Rebel Soldiers. Kanye spends more time behind the boards on this one (something many of you so eloquently recommended in the comments), sampling Thom Yorke’s “The Eraser”. Lupe steals the show, and props to Chris from GvB for getting this up before me.

Kanye West collaborated with Maroon 5, called Franz Ferdinand “white crunk” and remixed Fall Out Boy. Even after all that, who would’ve guessed that he’d start sampling Peter Bjorn & John and Daft Punk? Well guess what; on his new Mixtape, Can’t Tell Me Nothing, named after the newest single from his newest effort, Graduation, ‘Ye does just that, borrowing the beats from PB&J’s “Young Folks” and Daft Punk’s “Harder, Better, Faster, Stronger”. I just checked hype machine, and these songs haven’t been posted anywhere yet, so consider this an ATG exclusive. God Bless Mr. West.

This entry was posted on Sunday, May 27th, 2007 at 1:59 pm and is filed under Zack. You can follow any responses to this entry through the RSS 2.0 feed. Both comments and pings are currently closed.