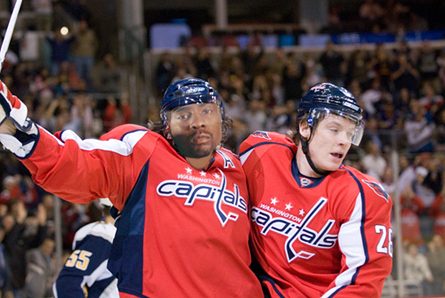 That’s easily the best thing I’ve ever created in photoshop.

Yeah, you’ve heard me say it before, but I’ll say it again: Wale is the second coming (no, not this WALE). He is the face of the growing Washington D.C. music scene (take that Ian McKaye) and is set to explode onto the national scene after what seems to be an eternity of waiting for his debut album. Until then, however, his unbelievable mixtapes will have to tide us loyal Wale fans over. His newest mixtape, The Mixtape About Nothing, is based off of Seinfield, which is not only awesome but may just be the coolest concept album ever. Not only does dude love Seinfield, he apparently loves hockey? Check his newest, “Back in the Go-Go”, in which he refers to himself as “Wale Ovechkin“, and gives shout-outs to Eric Lindros (“Flyer than the rest of them”) and the throat-slashing of Richard Zednik. Can you imagine Jay-Z giving props to Henrik Lundquist? Or Nas giving Sidney Crosby love? I think not. This couldn’t come at a better time, as the Caps have made a historic comeback from being the worst team in the NHL to the three seed in the NHL playoffs, with the hottest goalie (Cristobal Huet) and best player in the world, Alex Ovechkin.

Check “Back in the Go-Go”, where Wale steals the show from Bun B and Pusha T (from Clipse), as well as the magnificent “W.A.L.E.F.R.I.E.N.D.S.”, in which Wale raps over yet another Justice track (see: “W.A.L.E.D.A.N.C.E.”). Thanks to Derek for the heads up on the Justice mix.

This entry was posted on Monday, April 7th, 2008 at 1:17 pm and is filed under Artist Spotlight, D.C., Mash-ups, Zack. You can follow any responses to this entry through the RSS 2.0 feed. Both comments and pings are currently closed.